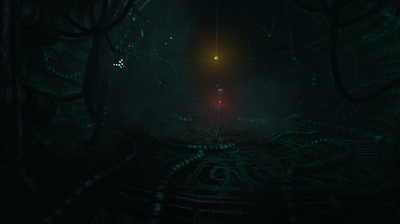 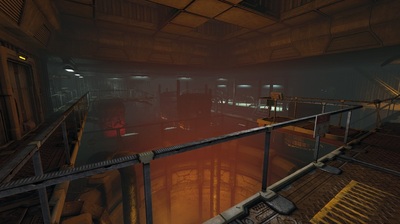 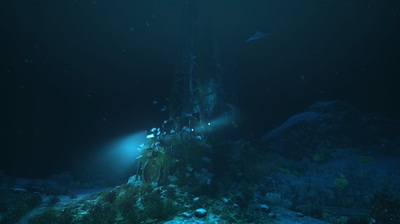 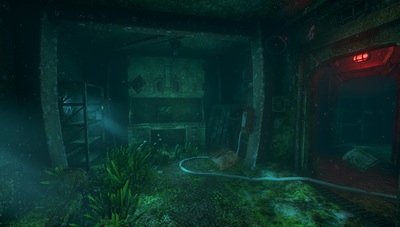 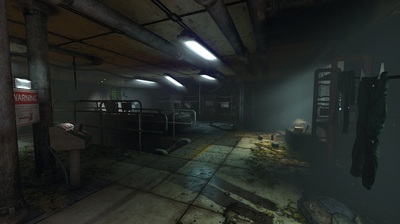 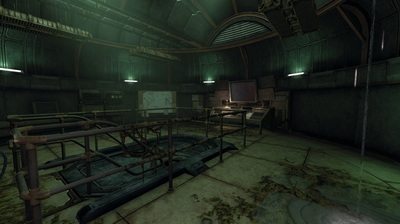 Set on Earth in the future, SOMA takes place in and around a futuristic underwater research facility called PATHOS-II, a facility which has been in a state of radio silence prior to your arrival.  Playing as the protagonist, Simon Jarrett, you will explore this facility and its surrounding seabed and structures.

Approximately 1/3 of the game takes place in the water, in sunken vessels and the open ocean floor. Sea life will be encountered in these detailed environments, ranging from ocean flora to large deep-sea creatures. The game's ecosystem includes clams, barnacles, crabs, seaweed, hammerhead sharks and various forms of smaller fish. The wildlife is furnished with dynamic AI and will react to the player; for example, in the case of crabs, they will flee the player and dig into the sand to hide.

The other 2/3 of the game takes place inside sealed underwater structures, such as the different substations of the aforementioned PATHOS-II research facility. The interiors of these structures, as can be seen in the game's trailers and screenshots, are comprised of elements reminiscent of sci-fi space stations or mining facilities; regimented living quarters, offices, industrial areas, scientific labs, and so on. Although these environments are futuristic and high-tech, they have a "lived in" aesthetic, showing clear signs of age and even disuse.

The relatively unexplored depths of the ocean provide a hostile, alien world of its own, made all the more unnerving by the massive pressure the ocean creates at its base and the prevailing absence of sunlight. This is something SOMA incorporates into its environment. The openness of the ocean floor helps to intensify the player's sense of vulnerability. In a corridor or an enclosed room, the player is afforded at least some degree of safety by being able to take cover or hide; this isn't the case with a wide open space like the ocean, which offers no way to reduce the number of directions from which threats may come.

SOMA is a science fiction game, and as such the setting reflects  this through its representation of technology and the design of its environments. Many of the environments are alienesque in appearance, showcasing otherworldly architecture and visual design (see first image in the gallery above). The mingling of the organic with the mechanical is prevalent. A number of people have compared these environments to the work of H.R. Giger, an artist known for his work on the Alien films and his very distinctive biomechanical style and choice of subject matter. [1]

The sci-fi setting itself is intended to be firmly grounded in the real world. For example, Amnesia: The Dark Descent was set in a world in which the game's logic and coherency of level design were routinely violated, something the game could get away with owing to the supernatural fantasy world in which they existed. While being sci-fi and fantastical in its own right, SOMA has a coherent and believable setting, which can be taken as representative of a plausible reality.
Trivia

- From the day the game was first announced in October 2013, virtually everyone in the gaming press and beyond assumed that it would be set in space. [2] The developers were apparently unable or unwilling to correct this assumption at the time, [3] choosing instead to reveal the game's true setting just one day before the first preview materials were released, on the 3rd of April 2014. [4]

- One member of the gaming press, Patrick Klepek of Giant Bomb, spent over an hour in October 2013 talking with Thomas Grip about the benefits of using space as a setting in a video game, but Grip never corrected his assumption. In a follow-up interview, after the true setting was revealed, the pair joked about how Grip had led him along. It was revealed in this interview that the game's underwater setting had actually been hinted at in promotional materials long before it was officially revealed. [5]

- The decision to set the game underwater came quickly, with both Thomas Grip and Jens Nilsson having come up with the idea independently of each other. [6] [7]

- One inspiration cited by Grip for the underwater setting is the 1989 film The Abyss. [8]

- As soon as the underwater setting was revealed, comparisons to BioShock abounded. [9] In an interview with Rock, Paper, Shotgun, Grip addressed the comparisons stating that BioShock's setting made little use of the water and its high pressures, whereas SOMA will more fully exploit these hazardous features of the deep sea. [10]
References:

[1] Check any press coverage of SOMA for instances of H.R. Giger comparison.
[2] Check any coverage of the game prior to the 3rd of April 2014 to see how it was universally assumed that SOMA was to be set in space.
[3] In this interview, the assumed space setting is discussed at length; Grip never corrects the host.
[4] This blog post from Thomas Grip is the first official confirmation of the game's underwater setting.
[5] Thomas Grip: "There have been hints about [the underwater setting] in every single material we sent out, but everyone has assumed..."
[6] Jens Nilsson: "Basically Thomas and I met [...] in a park in Helsingborg and I said: 'Thomas shouldn't we make a game that's under water?' and he was: 'oh yes, my God! I've been thinking the same thing'."
[7] Thomas Grip: "Actually, it came as a very quick decision, I remember the exact moment; [...] Jens said 'Well, I've just been thinking about, wouldn't it be cool to have, like, underwater[?]' and I said, 'shit, I've been really thinking about that too! Let's do it!'"
[8] Thomas Grip: "Abyss is a pretty good example of something we've had as an inspiration source, a little bit at least." (question arises @ 22:04)
[9] Read virtually any coverage of SOMA after the 3rd of April 2014 to see the plentiful BioShock comparisons.
[10] Thomas Grip: "I think that one of the big differences is that we have a sort of Aliens-like atmosphere in our game, the overall aesthetic. BioShock has their art deco style. It's almost a fantasy setting in BioShock. They don't really care about the ocean as such, other than it just has water in it. We've tried at length to make sure that we think about pressure differences and what sorts of things you'd have to do to build something underwater. That's an integral part of the game. The whole aesthetic is different."
Powered by